Post tensioned water tanks are becoming increasingly popular with respect to urban planning, largely due to their sturdy design and increased functionality. Their design allows them to serve a community for decades and more with little chance of leakage. Not only are they beneficial to the environment, they are also more economical than other types of wastewater storage and provide far more versatility. Read on to learn why post tensioned concrete tanks may be the best wastewater storage solution in the industry. 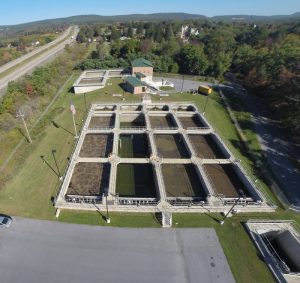 Like precast concrete tanks, post tensioned tanks must be built to meet the standards set by the American Concrete Institute (ACI). These standards ensure the tanks will hold up against earthquakes, age, and other factors. Post tensioned water tanks tend to be much more secure in the face of earthquakes than other waste water storage tanks. Compared to conventional tanks, post tensioned tanks are far less likely to need repairs over the years. This ensures that they will be reliable in the event of emergencies, and are better suited for emergency structures. They are also resistant against leakage or cracking during earthquakes. Their sturdiness overshadows conventional tanks, which are prone to damage and cracking from earthquakes and quickly malfunction afterwards, leaving the entire affected community with one less source for storing their waste water.

When engineering and construction teams first set out to build a post tensioned water tank, they have a world of options at their disposal. Post tensioned concrete tanks are able to cover land area of any shape or size, no matter the location. You can easily find a post tensioned tank in hollowed out patches of desert, up on steep, craggy cliffs and on flat land. They can even be constructed next to pre-existing buildings.

Post tensioned water tanks aren’t just flexible in size, but in shape. If you want, you can request that a post tensioned tank be designed to match a client’s aesthetic. Post tensioned tanks can be build in futuristic dome shapes or in square and fortified designs. The possibilities are endless.

Post tensioned concrete construction has been designed and perfected for resistance against damage and leakage. Unlike conventionally built tanks, post tensioned concrete tanks can be any segment placement length imaginable, which allows builders to finish them quickly without the need for as many joints. Post tensioned concrete also has three times the protection against corrosion, thanks to PT coating and sheathing which make it watertight. It is also given residual compression, which prevents shrinkage cracks. Further, the walls are prestressed, the weight of compression stretching the full height of the wall at 200 PSI. While walls are typically sectioned, they’re kept thin, and their reinforcement with 270 KSI steel (combined with an absent durability factor) enhances their effectiveness.