A truss is a structure composed of straight members forming a rigid framework.

The basic components of a truss consist of a top chord, a bottom chord, and web members, see Figure 1 below. The web members can be vertical or diagonal, usually a combination of both. The individual web members connect to the top and/or bottom chords at joints called nodes. All nodes are considered pin connected, meaning there is no moment or bending transferred thru the members.

Trusses may be constructed of either wood or steel. In residential construction wood is used almost exclusively, whereas for bridges and commercial structures steel trusses are the most common. There are two different types of trusses, planar and space. A planar truss is a 2-dimensional truss; these are very common in buildings and residences. A space truss is a 3-dimensional truss and is often used for power line pylons.

Trusses have many advantages over the use of beams. Often times they are lighter and cheaper than using a single deep beam. Additionally, they are able to span much greater lengths unsupported than a wood or steel beam could. This allows for the designer to create large open spaces where otherwise columns would need to be introduced to support the beams. As trusses have potentially large openings between web members they are ideal for buildings that have a lot of mechanical and/or electrical work to be run thru the ceiling plenum (the space between the visible ceiling and the flooring above). Where solid members are used the mechanical and/or electrical work must be run below the members potentially increasing the depth of the ceiling plenum and ultimately the height of the building.

There are many different configurations for trusses. The most basic would be the triangle formed from rafters and ceiling joists in a framed roof. More common for framed roofs is a gable truss which utilizes the rafters and ceiling joists but includes web members. This type of truss allows for smaller top and bottom chord members. See Figure 1 above.

Other truss configurations include the Pratt, Bowstring, Scissor, Vierendeel, and Arched trusses, see Figure 2 below. The Pratt truss utilizes both vertical and diagonal web members; the vertical members are in compression while the diagonal members are tension members. The Bowstring uses a horizontal bottom chord with vertical and/or diagonal web members with a “bowed” top chord creating an arched structure. Scissor and arched trusses are popular for cathedral ceilings, where both the top and bottom chords are either straight or bowed at the same angles creating a much larger open area than a truss with a straight bottom chord would. The Vierendeel truss is unique in that the members do not create a triangular form, but instead all the web members are vertical with fixed joints allowing for the transfer of bending moments. The Vierendeel truss is popular on the exterior frames of buildings as it allows for larger openings for windows and doors. 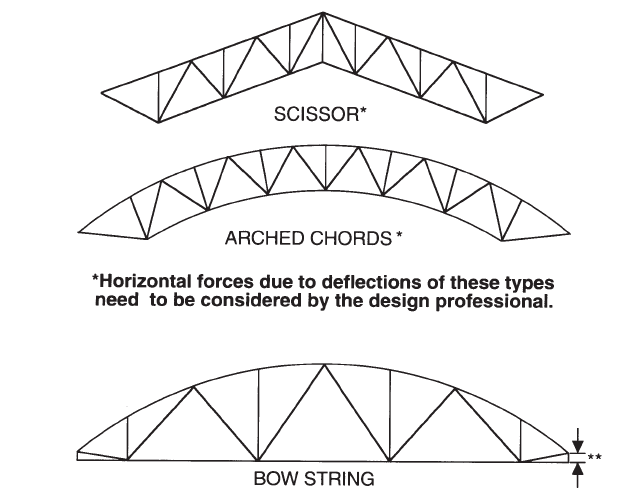 The key to designing trusses is to remember that statically, all of the sum of all forces at any node must equal zero. Thus the truss is always in a state of equilibrium creating a stable structure. Trusses are normally used for gravity loads such as dead, live, and snow loads. In commercial structures, they may also be used for lateral resistance, especially Vierendeel trusses, which creates a large moment frame to stiffen the building and distribute the lateral forces effectively.